Ever been in this scenario?: A new project starts. Everyone’s excited to jump in and get started. Everything is possible. Only good outcomes await and everything in this moment seems right with the world. You can feel the energy driving the team forward.

Then something happens. Reality hits. The unexpected rears it’s ugly head. You hit constraints you didn’t anticipate. You realize the problem you’re working on is more complex than you originally thought. The team’s energy begins to wane and you can feel you’re beginning to lose momentum.

For some teams, this scenario spells trouble. They let the project stagnate, or otherwise flounder. They never fully regain their energy and this eventually shows in their results (or lack thereof).

Other teams manage to power through it. They embrace the mess and some even use it to their advantage. They realize that this stage is normal, but it’s also unavoidable — in fact, it’s a necessary and essential part of doing good work.

The messy middle is generally where the most interesting things tend to happen. Because ultimately, it’s not about what you thought you knew going into a project. It’s how your work survives contact with the real world and how quickly your team learns and adapts to that new information.

You’ll also spot the messy middle in teams and companies on the organizational front.

In Tuckman’s “storming” stage, new teams go from polite and friendly to clashes in personality and work style. The honeymoon period is over and things start getting real.

“Some teams will never develop past this stage; however, disagreements within the team can make members stronger, more versatile, and able to work more effectively as a team. Supervisors of the team during this phase may be more accessible, but tend to remain directive in their guidance of decision-making and professional behaviour. The team members will therefore resolve their differences and members will be able to participate with one another more comfortably. The ideal is that they will not feel that they are being judged, and will therefore share their opinions and views. Normally tension, struggle and sometimes arguments occur. This stage can also be upsetting.”
~ Tuckman’s stages of group development

To be clear: Storming feels bad. The messy middle feels bad. In these instances it can seem like everything you are doing is wrong and impostor syndrome can start to creep in. But groups that can work through this become stronger and more effective. They move towards becoming high-performing teams.

Avoiding the Dark Swamp of Despair

Projects and teams tend to start happy and shiny because at this early stage, you know less than at any other point later in the journey. You are uninformed optimists, with unknown unknowns are all over the place.

But the problem isn’t these unknowns — these are a given. The problem is the team’s lack-of-awareness that these unknowns exist and will undoubtedly affect project outcomes. The goal isn’t to avoid this stage, it’s to prepare the team to make use of it.

Techniques like the pre-mortem — asking “how could we fail?” before a project starts — can help reveal some of the elephants in the room. This helps prepare the team mentally for what awaits them.

You won’t anticipate everything, but this gives the team permission to embrace the mess rather than fight it — while they still have the energy of uninformed optimists. The pre-mortem is just one technique to what you’re really trying to achieve: a psychologically safe space for the team to work, which will become essential when things start to get messy. 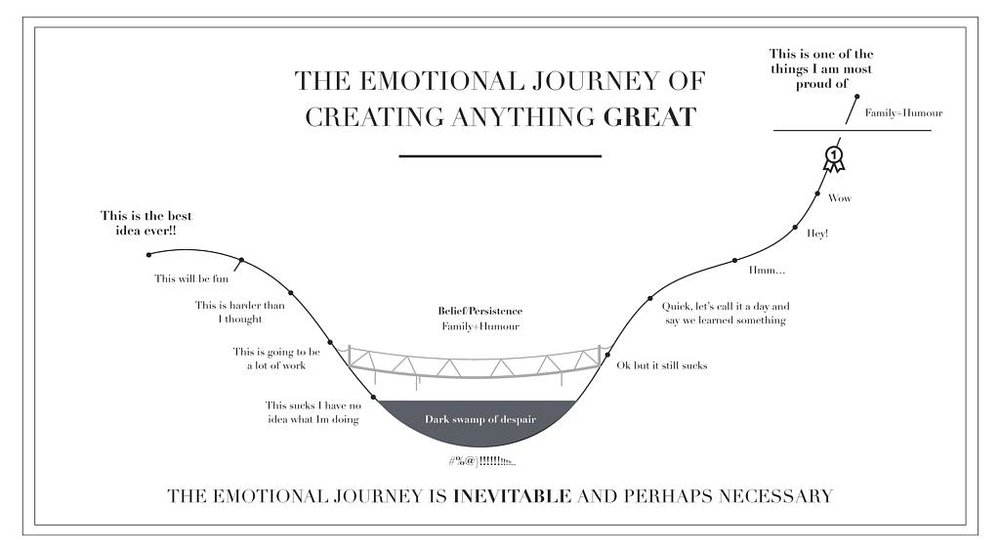 The messy middle isn’t the result of a mistake. It can’t be avoided. It’s a necessary and essential part of the process that actually strengthens good teams and their work. Having the awareness and perspective that it’s just a normal part of the process can help you mentally prepare for when the work gets messy, and push through to more effective outcomes.

This post was originally published on our new Automattic design blog.